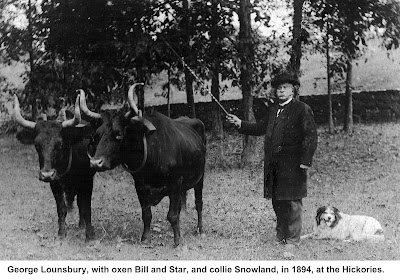 George Lounsbury:
The Plain and Simple
One doesn’t usually find a finely dressed gentleman — much less a state governor — leading a team of field oxen. The man photographed with a whip and a yoke is George E. Lounsbury, 58th governor of Connecticut (1899-1901), and the scene is his farm, The Hickories, in Farmingville, about 1900.
Governor Lounsbury had lived on the Lounsbury Road farm since he was two years old and, though a Yale graduate and prominent businessman, retained it as his lifelong home. When he died in 1904, The Ridgefield Press observed, “Wealth and public position, when attained, often cause men to ignore those who have contributed to their success. Not so with him. He was fond of the plain, simple, unconventional customs of rural life and always kept himself in close touch with the rural people of the town.”
In 1964, after the picture had appeared in The Press for a history feature, Katharine Bell Russell of Columbus, Ohio, formerly of Pin Pack Road, wrote the editors: “I was five years old and remember well when that picture was taken, as I was there. My grandmother was the widow of the Rev. John Swinburne Whedon, who died while he was minister of the Methodist Church in Ridgefield, and a year later she married Governor Lounsbury. That was in 1894. We spent all our summers at The Hickories from 1896 to 1915. The oxen were Bill and Star, and the white collie was Snowland.” 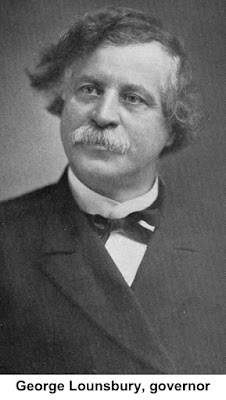 Today, The Hickories, owned by the Brewster family, is Ridgefield’s only working farm. In 1996, the town bought the development rights to 101 acres of its farmland.
George Edward Lounsbury was one of the town’s most influential citizens. In fact,  his Press obituary reported, “he wielded a greater influence over his fellow townsmen than any other single person.”
He was born in Pound Ridge, N.Y., in 1838, but his parents moved to Farmingville two years
later, and it was at the Farmingville Schoolhouse that he received his early education (around 1899, he donated a brand, new schoolhouse to the district; after it closed in 1940, it wassold and moved to North Salem, N.Y., where it served many years as an artist’s studio).
He graduated from Yale  in 1863 and from Berkeley Divinity School three years later. He began his career as an Episcopal priest, serving in a couple of Connecticut congregations, but because of throat problems, left the ministry and entered the family business,  operating shoe factories in Norwalk for the rest of his life.
An active Republican, he was elected a state senator in 1895 and 1897, and governor from 1899 to 1901. (His brother, Phineas, had been governor 12 years earlier.)  He was a popular candidate; according to an 1899 history, the Republicans swept the state “with a majority which has been exceeded only twice in the history of that party.”
He had a quiet two years in office. The Hartford Courant put it this way: “In looks, manner and oratory, there was a decided suggestion of the South in George E. Lounsbury...At the state house, he was a useful and ornamental senator, and if no hard problems came his way as governor, he at least performed the routine and ceremonial duties of the office with ease and a becoming dignity.”
After his retirement, he became president of the First National Bank here (an ancestor of the Wells Fargo branch on Main Street).


“Although he was more than ordinarily successful and acquired wealth, position and prominence, he always retained an interest in the common people, with whom he mingled freely and in whose welfare he was deeply interested, as he often showed in many practical ways, unknown to the general public,” his obituary said.