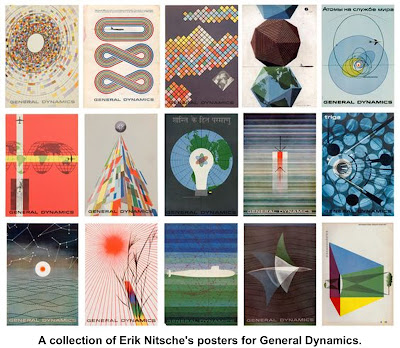 Erik Nitsche:
Self-Effacing, Top-Ten Designer
Most people have never heard of him. Even those who work in his field of graphic design might shrug their shoulders if you posed his name today. Yet millions of people have seen the work 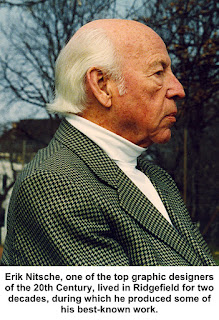 of Erik Nitsche, who has been called progressive and trend-setting by both scholars and critics. In fact, Michael Aron,  a professor at the Parsons School of Design, places him  “on the top-ten list of the best 20th-century designers in the world.”

Over his 60-year career Nitsche was involved in art direction, book design, typography, illustration, photography, film, signage, exhibits, packaging, industrial and corporate design, and advertising. He created scores of posters, book and record-album covers, ads, postage stamps, and even typefaces. Some of his work, particularly posters, are in the collections of top museums.
“He was among a handful of progressive designers and artists who imbued American graphic design with a modern European sensibility,” said The New York Times.
Erik Fredi Nitsche was born in Switzerland in 1908 and studied at the Collège Classique of Lausanne in his home town. He began his career working as a graphic designer for magazines in Switzerland and Germany before moving to the United States in 1934.
He spent two years in Hollywood, where he was friends with composer Frederic Holländer, actress Marlene Dietrich, and MGM special-effects director Slavko Vorkapich. Two years later, he 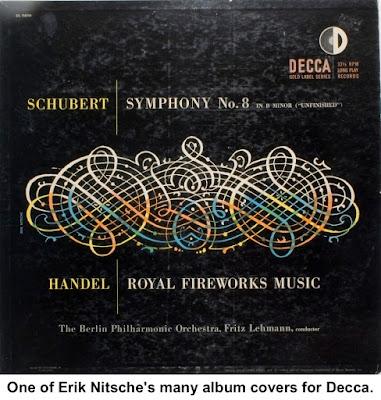 moved to New York where expanded his range of work, but continued to do art for the film industry, producing many posters.

In New York, he began doing covers and illustrations for such magazines as Harper’s Bazaar, Fortune, Town and Country, Vanity Fair, House and Garden, and Look. He created newspaper advertising campaigns for department stores like Ohrbach’s, Saks Fifth Avenue and 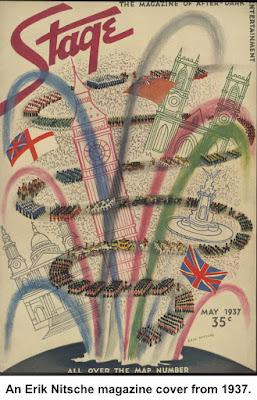 Filene’s, drew subway posters for New York Transit, and designed more than 200 record album covers for Decca, virtually all of them for classical music. 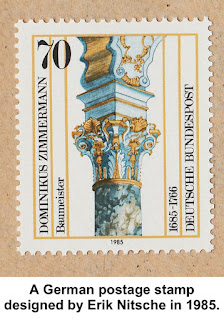 In the late 1950s, he worked for General Dynamics, which was building the Nautilus, the first nuclear submarine.  Nitsche was commissioned to develop “a visual image that would introduce this submarine to the world and at the same time emphasize the company’s peaceful concerns,” The Times said. “The design for the submarine was top secret, so Mr. Nitsche devised a symbolic solution based on the message ‘Atoms for Peace.’ ” Posters from this campaign, published in six European and Asian languages, have become classics among modern posters and are in the collections of the Museum of Modern Art, The Smithsonian, and the Museum of Fine Arts in Boston.
He also did memorable posters for Universal Pictures and 20th Century Fox. One of his best-known was for “All About Eve,” the 1950 film starring Bette Davis and featuring a little-known Marilyn Monroe.
Nitsche moved to Ridgefield in 1954 and lived in a large, turn-of-the-century house on Lounsbury Road in Farmingville, which he renovated in dramatic fashion in collaboration with the acclaimed architect Alexander Kouzmanoff. He later lived on Old Branchville Road. In 1974, he moved to Europe, but eventually returned to this country and was living on Mill Plain Road in Danbury when he died in 1998 at the age of 90.
His former wife, Margaret “Gretl” Nitsche, was a longtime Ridgefielder who worked as a 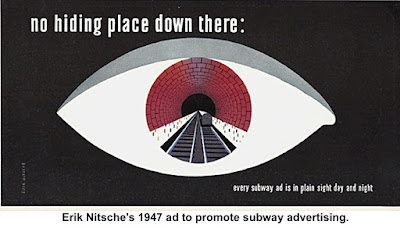 real estate agent with the Gordon Walsh Agency in town. A native of Germany, she died in 2005 at the age of 94.

Erik Nitsche’s name may be unfamiliar even to some who are knowledgeable about the history of graphic design, probably because he was reluctant to seek publicity. He believed his work should speak for itself.
In a 1950s essay about Nitsche, designer and author P. K. Thomajan wrote: “Self-effacement, he finds, keeps the blighting shadow of the ego out of one’s work.”