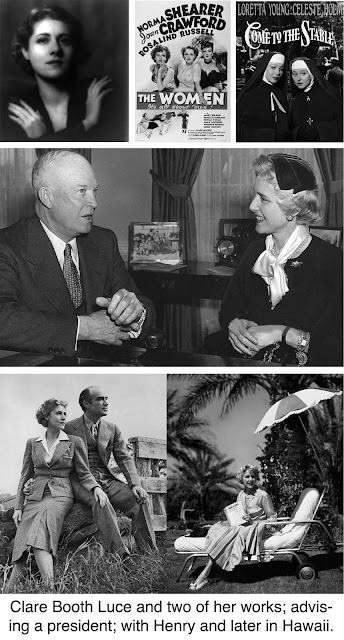 Clare Boothe Luce:
A Most Admired Woman
Clare Boothe Luce “had those sought-after qualities – good looks, style, a sharp tongue, and great boldness – that made her one of the most popular and admired women of her day,” The Ridgefield Press said in her obituary in 1987.
She was a famous writer, a congresswoman,  an ambassador,  and the wife of one of the most powerful men in the country, yet Luce was born into near poverty in 1903.  Her musician father soon abandoned her chorus girl mother, who worked hard to see that her daughter was well-educated.
And Clare Boothe Luce worked hard to use that education. By 1930, she was a $20-a-week writer for Vogue and wrote pieces for the New Yorker; three years later she was managing editor of Vanity Fair.
She wrote plays, movies and novels, including a 1940 best seller, “Europe in Spring.” Several of her plays were on Broadway, including the smash hit, “The Women,”  which also became a popular movie.
She was nominated for an Academy Award for  “Come to the Stable,” a 1949 film that tells the story of two French nuns who come to a small New England town and involve the townsfolk in helping them to build a children's hospital.
As a Greenwich resident she served as Fourth District congressman from 1943 until 1946.
She was only the 29th woman to serve in the U.S. House of Representatives, but most of her predecessors took office after the death of a husband or father. Luce was only the 13th to be elected on her own merits.
After she retired from Congress in 1946, she and her husband, Time-Life magazine publisher Henry Luce,  bought the 100-acre former estate of Wadsworth R. Lewis  on Great Hill Road.  She began participating in the Ridgefield community, and was active in St. Mary’s Parish.
At a PTA meeting here in 1950, she urged more federal support of schools, particularly “Negro” schools in the South.
A devout Catholic, she also favored public support of non-public schools. “To deny aid to private and parochial schools seems to me to be class legislation,” she told the PTA.
Mrs. Luce also followed local politics and among other events, attended a famous 1950s GOP caucus in town in which six people — four of them women — sought the party endorsement to run for state representative (Nancy Carroll Draper won).
During the Eisenhower administration, Mrs. Luce, a staunch Republican, was appointed U.S. ambassador to Italy. In 1962, she was a rumored U.S. Senate candidate from Connecticut, but the Luces both changed their voting address to New York and she ran unsuccessfully for the Senate there on the Conservative ticket.
In 1966 the Luces sold their 22-room mansion; Henry Luce died a year later. Clare Luce eventually moved to Hawaii and late in life still held such stature in the party that when George H.W. Bush was first running for president, he visited her in Honolulu  to get her support.
She died in 1987 at the age of 84.
Clare Boothe Luce was very quotable, and among the most famous – and pointed – observations was, “A man’s home may seem to be his castle on the outside; inside is more often his nursery.”