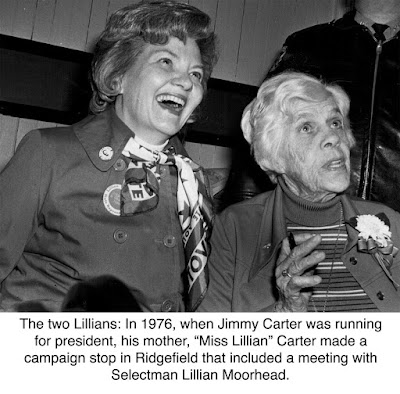 Lillian Moorhead:
Ahead of Her Time
Men had populated the Board of Selectmen for 265 years, when, in November 1973, that all changed: Lillian Moorhead was elected the first woman ever to hold a seat on the board.
“Womenpower” did it, she said the day after the election. “I hope my election will encourage more women to run for office.”
It may, indeed, have have helped do just that, for in the years after her election, women began winning more and more seats in town government, often holding majorities on boards and commissions. And eight years after her pioneering win, Ridgefield elected its first woman chief executive, Elizabeth Leonard, who, ironically, defeated Moorhead for the job of first selectman.
“I was in favor of a state income tax and Liz creamed me,” Moorhead said 10 years later. (In 1991, after years of debate, the income tax was finally adopted. “It takes the state a while to catch up with me,” Moorhead said afterwards with a smile.)
A native of New Jersey, Moorhead was born in 1932. She and her husband, James, had lived in the South and on the West Coast before moving to Ashbee Lane in 1963.
She was a liberal Democrat who won the 1973 election alongside First Selectman Louis J. Fossi, also a Democrat, but more of a conservative. Despite Ridgefield’s heavy Republican majority, the two Democrats controlled the board, holding two of its then three seats.
“Lou is a native, a very popular guy,” Moorhead said, explaining the win years later. “Also, there was Watergate and the beginning of the women’s movement.”
Moorhead was re-elected four times, holding her seat until 1983 when she retired. As a selectman, she was an especially strong advocate for creation of the Housing Authority that eventually built the Ballard Green senior housing project.
“There were few believers in the Housing Authority in those early days,”  Fossi told Moorhead in front of more than 200 people who gathered for her retirement party in 1984. “But you acted out of concern for people who are less fortunate than most of us.”
Fossi and Moorhead often disagreed on issues, and votes sometimes found her in the minority, despite party affiliations.
“It’s better to be ahead of the times than behind them, and Lillian, you were ahead of them,” said Judge Romeo G. Petroni, a lifelong Republican, at the retirement dinner. “You have your principles and you stood behind them, even when Lou didn’t understand.”
Moorhead later served many years on the Housing Authority she helped to create. She was also on the Youth Commission, was a trustee of Danbury Hospital, and was a board member of the NAACP, and Regional Y. She was a founding member of the Women’s Political Caucus, which was active here in the 1970s and 80s, and which successfully pressed for the conversion of the Boys Club into a Boys and Girls Club. She also belonged to Friends of the Library, Meals on Wheels and the League of Women Voters.
Professionally, she tried on several different career hats, last of which was as a Realtor. She was well-regarded at that: In 1984, Governor William O’Neill appointed her a member of the Connecticut Real Estate Commission.
When she was moving to Martha’s Vineyard in 1991, she told a Press interviewer, “I used to be a newcomer. Now I’m a townie. It happened in the blink of an eye.”
A 1984 Press editorial said of Moorhead: “One of the most independent thinkers among recent selectmen, she was not afraid to stand up for positions that may have been unpopular with the administration and even with her party. Yet always her positions were enlightened ones, well-considered and with the community’s best interest  in mind.”
When Moorhead died of cancer in 1997 at the age of 65, her daughter, Sarah, observed, “My mom was one of those individuals who truly touched the souls of everyone who was lucky enough to have met her. She embraced life with such determination and zest and tried to impart that to others.”