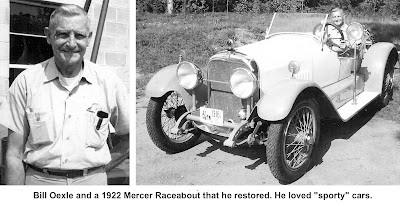 Bill Oexle,
Master Restorer
“I can’t imagine anybody cold-blooded enough not to appreciate something as beautiful as these things can be,” Bill Oexle told a newspaper reporter in 1976.
The object of his affection was the antique car, and Oexle had spent much of his free time over three decades restoring dozens of them.
William H. Oexle (pronounced OX-lee)  was born in New Jersey in 1908 and came to Ridgefield in 1949 after a career in Ohio where he was sales manager for the Tyson Bearing Corporation. Earlier he had worked in the precision tool field in California and in auto sales and service.
He and his wife, Lina, known as Lee, first lived on Wilton Road West and later on North Salem Road and later way out Ridgebury Road almost in Danbury only later to move back to a home built by their son Sandy Cook in back of their place on North Salem Road. Soon after arriving, he started the Oexle Supply Company, a contractors’ supply business and distributor of nuts, bolts, chain, cable, tools, and other hardware items as well as fire extinguishers. In 1964 he moved his company from the old Ridgefield Bakery building behind what is now the the Planet Pizza/Amatuzzi building to quarters on South Street, built to his specifications. His firm grew and when he sold it in 1973, he was doing business throughout the Northeast as well as Europe and South America.
In 1970 he opened the Taylor Rental Center on South Street and continued to operate that business until his death.
Oexle was one of the original members of the town’s Police Commission, created in 1955, and was its first chairman.
His greatest love, however, was the restoration of old cars, an avocation he began in 1947. Five years later he was restoring them professionally.
“It takes a long time to learn how to do it,”  he told the Press in 1979. “The hobby grows and for every man involved in it, some friend of his becomes interested. I would guess there are 200,000 people involved in antique cars.”
He said many restoration hobbyists get started because of fond memories of cars past. “Maybe your father or uncle had a certain kind of car, and you try to find one like it,” he said. “Some people want to get the oldest car they can get — sporty old cars are the ones that appeal to me.”
He said that “old cars give a man an outlet for his desire to use his hands, which he probably doesn’t get in the business world. By the time you have worked on an antique car, doing the mechanical work, perhaps the upholstery, painted it with paint that matches its original coat, you feel that you have put a lot of yourself into it.”
Active in the Horseless Carriage Club of America and the Antique Automobile Club of America, he won many national awards for his restorations. Every car he built that was shown in national competition won an HCCA National First Prize. “He set the standard at the time,” said Rob Kinnaird, who had assisted Oexle in his restorations.
Several times he was chairman of the Ridgefield Antique Car Show at Veterans Park, which was co-sponsored by the Lions Club for decades and featured up to 200 old vehicles. In fact it was Oexle who convinced the Lions to sponsor the car shows with Horseless Carriage Club of America, starting in 1962. Because of his reputation, many collectors brought their prize restorations to this show. (They were discontinued around 1983 after Veterans Park became unavailable due to the installation of an underground irrigation system that a couple hundred cars could easily damage.)
Over the years Oexle restored such antiques as a 1934 Packard Coupe, 1934 LaSalle Convertible Coupe, 1923 Austro-Daimler Boat Tail Roadster,  1923 Buick Sport Touring Car, 1931 Mercer Raceabout, 1928 Chrysler Roadster, and a 1927 Gardner. His first professional restoration was a 1919 Locomobile; ironically, the last, completed after his death, was a 1920 Locomobile. In the later years, he’d was often assisted by Kinnaird, Guy Montanari and Hiram Scott. Hiram “Scotty” Scott owned Scott’s Autobody in the building off Main Street now occupied by Milillo Farms.
His favorite car was the late twenties Packard, a number of which he restored, the last one in the late 1970s. “In the 1920s and 30s, I was a service mechanic and sold cars, mostly Packards,” he said in an interview a year before his death in 1980 at the age of 72. “I formed an attachment for 1928s — just to look at them was exciting. A ’28 roadster was a nice auto, handsome, and it performed well.”
“How do you drive a ’28 Packard,”  interviewer Linette Burton asked Oexle.
“Very carefully,” he replied with a smile. “Very carefully.”