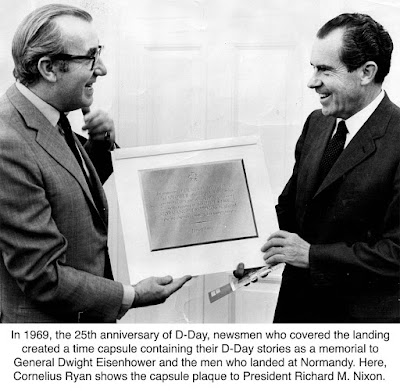 Cornelius Ryan:
'Reporter'
Cornelius J. Ryan died in 1974 just months after completing “A Bridge Too Far,” the third of his meticulously researched books on World War II.
“He had struggled valiantly against the cancer that finally claimed his life, almost forcing himself to stay alive until his book that chronicled the battles and the men who fought them was completed,” Linette Burton wrote later in The Ridgefield Press.
Mr. Ryan’s trilogy, which included “The Longest Day” and “The Last Battle,” is famous throughout the world, and his abilities as a historian of World War II were legendary. For “The Longest Day” alone, he interviewed more than 1,000 Americans, Frenchmen, Germans, and others who took part in the battles.
Born in 1920 in Dublin, Ireland,  Ryan as a young man studied the violin at the Irish Academy of Music in Dublin. However, he soon switched his interest to writing, becoming a reporter covering the war in Europe for Reuters and the London Daily Telegraph.
He flew on 14 bombing missions with U.S. Army Air Force and was embedded in General

George S. Patton's Third Army, covering its actions until the end of the European war. He then went to the Pacific, covering the final months of war there.

In 1947 Ryan moved to the United States, writing for Time, Newsweek and Collier’s magazines. He married writer Kathryn Morgan in 1950 and became a U.S. citizen.
It is Ryan’s coverage of Operation Overlord, the Battle of Normandy, for which he is best known. It is the subject of “The Longest Day,” which he spent 10 years researching. The book has sold well over 25 million copies and has appeared in 18 languages. It was also made into a movie that featured dozens of Hollywood stars.
Ryan was at Normandy twice on D-Day — aboard a bomber that flew over the beaches, and then, after he landed in England, on a patrol boat that took him back. He had just turned 24.
The book appeared in 1959 and he devoted the remainder of his life to the rest of the trilogy.
He was a master of research. “I have no less than 7,000 books on every aspect of World War II,” he once wrote a friend. “My files contain some 16,000 different interviews with Germans, British, French, etc.
“Then there is the chronology of each battle, 5x7 cards, detailing each movement by hour for the particular work I’m engaged in. You may think this is all a kind of madness, an obsession. I suppose it is.”
The work was not only painstaking but also grueling. Ryan told The New York Times in 1966 that “the actual writing of ‘The Last Battle,’ quite apart from its research preparations, took me 29 months. At one point I destroyed 35,000 words and started over.  When I handed in the manuscript last December, I was exhausted. In fact, I was limp.”
A few days later he became ill and spent nearly a month in bed. When he recovered, he said, he began spending more time “with the people I real enjoy working for — my family.”
While he completed three books on the war, Ryan had said he had planned five.
Among the many commendations he received was the French Legion of Honor. In 1973, at 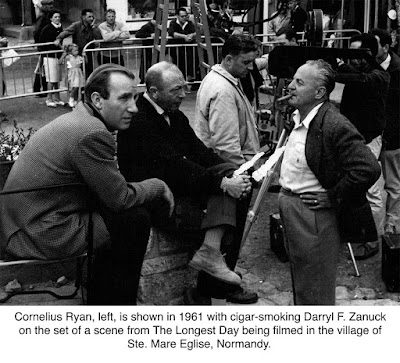 his home on Old Branchville Road and amid much security, a French delegation of more than 30 people, including the French ambassador to the United States, presented him with the award for his work chronicling the Battle of Normandy.

“I was not telling a lie in my little speech to the ambassador when I said that I did not think that there had been this many French in Ridgefield since de Rochambeau,” he later told Press publisher Karl S. Nash.
Much of the work on his second two books was done at his Old Branchville Road home with the research help of his wife, Kathryn.
Four years after his death, his struggle with cancer was detailed in “A Private Battle,” written by Kathryn Morgan Ryan from notes he had secretly left behind for that purpose.
Ryan was only 54 when he died. Many dignitaries and soldiers from around the world attended his funeral in St. Mary’s Church; a eulogy was delivered by Walter Cronkite, the CBS news anchorman.
Ryan is buried at Ridgebury Cemetery, beneath a gravestone that says simply, “Cornelius Ryan, 1920 - 1974, Reporter.”
“In a sense, Cornelius Ryan started reporting ‘The Longest Day’ on June 6, 1944, and never really stopped,” said Columbia Journalism School professor Michael Shapiro. “That day, that war, was his story.”