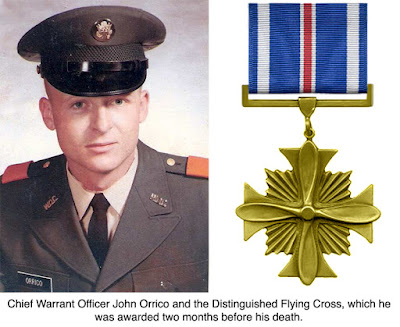 John T. Orrico:
A Distinguished Hero
John Orrico’s Ridgefield High School yearbook said his ambition was “to become a pilot.” Orrico became a pilot, and he used his skills in the most dangerous place in the most dangerous way: He commanded an attack gunship in the Vietnam War.
Born in Stamford in 1948, John Thomas Orrico grew up in Ridgefield, one of three sons of Fred and Helen Casey Orrico, who ran the popular King Neptune Restaurant on Route 7 for many years (Helen had been a sergeant in the U.S. Marine Corps while Fred was a Navy seaman aboard the battleship Missouri when the Japanese signed their surrender on its deck).
At Ridgefield High School, where he graduated in 1966, John Orrico played football and golf, was in the band, and helped in the library. He attended The Citadel before enlisting in the U.S. Army in 1968 where he underwent helicopter pilot training and was commissioned a warrant officer.
He was sent to Vietnam in August 1969 to pilot Huey UH-1C attack helicopters. The UH-1C,  fitted with machine guns and rocket packs, was used to support ground troops in combat.
Piloting one of these helicopters in Vietnam was incredibly dangerous. Of the 696 UH-1Cs 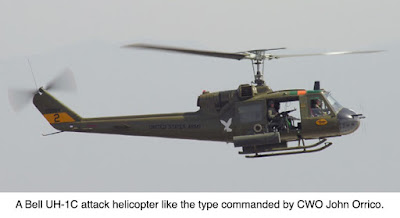 that the Army used in combat, 415 were destroyed, according to military historian Gary Roush. A total of 167 of their pilots and 158 crew were killed.

Of all 7,000 different models of UH-1 Huey helicopters flown in Vietnam, 3,300 were destroyed, and 1,074 of their pilots died.
Within a year of his arrival in Vietnam, Orrico had earned the Bronze Star, the Army Commendation Medal, and the Air Medal. But his highest award, the Distinguished Flying Cross, was received Aug. 28, 1970 “for heroism in action while engaged in aerial flight in connection with military operations against a hostile force.”
However, it was not a hostile force but a helicopter that killed CWO Orrico two months later.
According to Army records, on Nov. 2, 1970, at 6:50 a.m,  Orrico took off with a crew of three from a base at Rach Gia near the very southern end of Vietnam, and was heading for the Rach Soi Airfield for refueling. After making a right turn and leveling off at 500 feet, “the main rotor system separated from the aircraft,” which then crashed and exploded, killing all four men.
Orrico was due to come home the next month.
The 22-year-old soldier was buried with full military honors at St. Mary’s Cemetery.
He was the third and last Ridgefielder to lose his life in the Vietnam War.