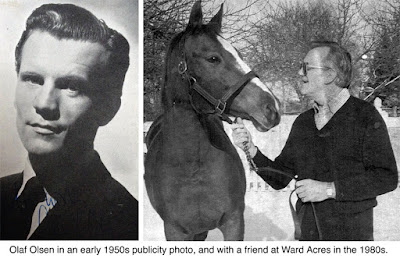 Olaf Olsen:
A Man of the Movies
Olaf Olsen had a long career both in front of and behind the camera.
Born in 1919 in Heidelberg, Germany, Olsen moved to England when he was 15, and began acting professionally while still a teenager. He played mostly supporting roles in 29 British films including “The Man in the White Suit,” “Lilli Marlene,” and “We Dive at Dawn,” alongside such greats as Alec Guinness, Deborah Kerr, John Mills, and Leslie Howard.
At 18, he portrayed a German POW in the BBC production of “Journey’s End,” the first full-length drama ever broadcast over live television.
He was only 19 in 1938 when he played Queen Victoria's son-in-law with Dame Anna Neagle as the queen in “Sixty Glorious Years,” a film about the reign of Queen Victoria. In 1953, the year of the present queen's coronation, he portrayed Prince Albert with Miss Neagle in the musical version of the Victoria story, “The Glorious Days,” which was at London’s Palace Theatre for two years.
Olsen also appeared in more than 1,000 BBC radio and TV broadcasts. In 1954, he went to Hollywood to sign a movie contract but Jack B. Ward offered him the vice-presidency of Ward Acres Studios of New Rochelle, N.Y., a newly formed enterprise that produced TV commercials and documentaries. In 1957 he and Ward moved to a Ridgefield estate that had once been the Ridgefield Golf Club, calling it Ward Acres, and breeding and raising award-winning thoroughbred racing horses.
He continued to produce travel documentaries as the Olsen Film Productions Company, serving as cameraman, producer, director, cutter, editor, and synchronizer. Distributed by the J. Arthur Rank Group, most were world travelogues, but some also dealt with horses and wildlife. His favorite was “Lion Country Safari.”
One of his interests was exotic waterfowl, and he kept a number of species of geese and ducks from around the world on a Ward Acres pond alongside Lewis Drive. He gave up the hobby, he said, after both wild predators and neighborhood children repeatedly attacked his birds.
Almost as soon as he arrived here,  Olsen became active in the Red Cross. He also formed a group that visited and entertained patients — including the criminally insane — at the old Fairfield Hills State Hospital in Newtown, Southbury Training School, and other institutions and hospitals in the region. He showed his films to many organizations and in many schools.
Did he miss acting? he was asked in 1975. “No,” he replied. “When you've had your name in lights for two years in London, what else do you want?”
Nonetheless, in 1996, when he returned to London for a memorial to Dame Anna Neagle, many fans sought his autograph and Princess Anne invited him to a party. “What a delightful and fascinating man he is,” the Princess was quoted as saying after meeting and chatting with  the long-retired actor.
Olsen died in 2000 in Ridgefield at the age of 81.