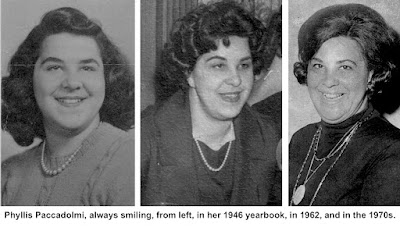 Phyllis Paccadolmi,
The Face of the Library
When Phyllis Paccadolmi retired in 1999 after 53 years with the Ridgefield Library, The Ridgefield Press described her as “the friendly face, the kind voice, the hometown touch that made the Ridgefield Library more than a place of books and research.”
The Ridgefield native was born in 1929. Two months after her birth, her father died, leaving her mother to raise five children. Phyllis Paccadolmi grew up here and while at Ridgefield High School, she was already pursuing her interest in libraries: She had permission to leave study hall early to assist school librarian May Boland with typing cards and mending books.
She joined the Ridgefield Library after graduating from RHS in 1946. That was before several additions that enlarged the building. “Stacks were in the back,” Paccadolmi said. “Fiction on one side, non-fiction on the other. History was downstairs.”
“Generations of Ridgefield’s mothers and children, students and senior citizens came to know the library under Ms. Paccadolmi’s presiding spirit,” The Press said. “And in a world sometimes indifferent, sometimes too busy, they found a refuge of kindness, warmth and humanity.”
“She was the face of the library — she was the Ridgefield Library to generations of kids,” said reference librarian Lesley-Anne Read, who worked with Paccadolmi for more than a decade. Mary Rindfleisch, assistant librarian, said that “over her 53 years of service, ‘Miss P’ had a hand in literally every aspect of library operations. More importantly, however, she was a warm and welcoming presence who belied all the stereotypes of grim, scowling librarians and made the institution a true home for so many staff and patrons.”
Traditionally, the Ridgefield Library had been the object of the generosity of some famous and wealthy people. Paccadolmi knew them all — and sometimes even worried about them.  In a profile of Paccadolmi on her 30th anniversary at the library, Elizabeth Stolper told of the time the sizable Broadway actor  Zero Mostel came in with his leg in a cast. “Miss Paccadolmi hastily offered to get him anything he wanted from downstairs, but he insisted on negotiating the [steep, circular] staircase himself. She held her breath, aghast at the possibility of lifting that large object if it stumbled. Fortunately, all went well.”
During her career the library began the long process of computerizing its catalogues and other systems as well as expanded the building. When she started, she was one of two staff members. She was named head librarian in 1955 but it was not until three years later that the staff was increased to three people. When she retired in 1999, there were 18.
Paccadolmi’s other love was St. Mary’s Church where she and her sister, Gelsina, cared for the the church linens or “altar cloths,” washing them weekly with cakes of  brown soap that they made themselves. They also cleaned  and polished the church brass, especially candlesticks, and often supplied flowers for the altar from their own garden.
She also enjoyed travel. “In 1956 I started traveling — name it, and I’ve been there,” she told The Press in 1996. “I don’t go on tours. I don’t mind traveling by myself. When I went to Taiwan, I was on the plane for 24 hours.”
And what did she do in retirement? She became a volunteer with the Friends of the Ridgefield Library.
“I loved the library — I spent more hours there than at my own house,” Ms. Paccadolmi said  a few months after retiring, as she accepted the Ridgefield Lions Club’s first Citizen of the Year award. “I miss the people — the staff and the patrons.”
She died in 2006 at the age of 76.