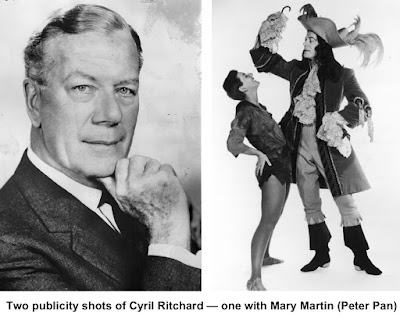 Cyril Ritchard:
‘Captain Hook’
Millions knew him, not by his name but by his character. For Cyril Ritchard played Captain Hook alongside Mary Martin when the acclaimed Broadway production of “Peter Pan” was staged live for television March 7, 1955, making TV history with its huge audience and high quality production.
His face and his voice were famous and he enjoyed telling of the time he was spotted by a rough-looking gang of teenagers who surrounded him.
“I thought they were going to attack me, but instead they stared and exclaimed: ‘You're Captain Hook!’ I'm glad the reason for their attention was curiosity, not animosity.”
The witty actor from Australia starred in countless stage and screen productions around the world and over a career that started before World War I and ended in 1977 when he collapsed on stage of a heart attack.
Born Cyril Trimnell-Ritchard (a name he shortened to fit on marquees) in 1898,  Ritchard was 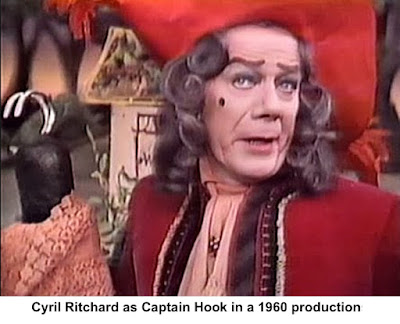 the son of a hotel manager father who wanted him to become a doctor. However, he quit medical school at the age of 19 and took to the stage, making his debut in the chorus of a Sydney musical. Three months later, he was performing the lead.

From there he went on to appear over the next half century in innumerable comedies, Shakespearean plays, musicals, and even operas.
“I have four notes, two of them good,” he said of his singing abilities.
Ritchard also made six movies, including “Half A Sixpence” in 1967.
Shakespearean comedy fascinated Ritchard, who often performed at the American Shakespeare Theatre in Stratford, Conn., and worked to raise money for its survival. In an effort typical of both his 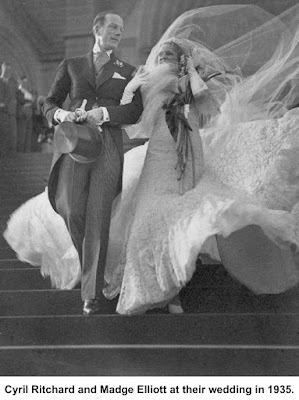 energy and his versatility, he directed the play and performed two parts (Oberon and Bottom) in a 1967 production of “A Midsummer Night’s Dream” at Stratford.

“It’s really a mental feat,” he said at the time. “The changes would be quite impossible if my mind panicked...But I like the challenge.”
Throughout his career he was known for his smile and his sense of humor. He once told Leonard Lyons of The New York Post That he was unaffected by small audiences in theaters. “Fortunately,” he said, “my sight is bad, so I can’t even see the empty seats.”
“He was a very funny and witty fellow,” said actress Kathleen Eason, a longtime friend and fellow Ridgefielder. “His stories and anecdotes of happenings to him on and off stage were 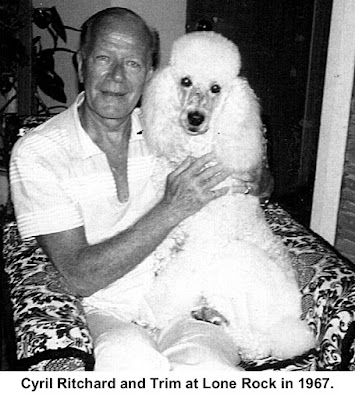 hysterically funny. Once, when he was very young and just starting to be successful, a fan asked for his autograph at a movie premiere. Cyril brightened right up and with his pencil poised, began laboriously to write: ‘Best wishes and good luck, Cyril Ritchard’ The irate fan said: ‘Come on, hurry up, don’t write a book. Here comes Greta Garbo!’ ”

He maintained that he developed his abilities at comedy as a child. “As I was taken to my room to be spanked by my father, I had to think of something to make him laugh,” he said. “If I could, it was a pretty weak spanking.”
He bought his Danbury Road home, which he called “Lone Rock,” in 1960, and “absolutely loved Ridgefield and that little house,” Eason said. “He couldn’t wait to get out of New York and to his Shangri-La, as he called it.”
Ritchard frequently entertained guests from New York at Lone Rock. One Sunday in the summer of 1965, he bused up the entire cast and crew from “The Roar of the Greasepaint — The Smell of the Crowd,” in which he played one of his best-known roles. He had planned to serve them

beefsteak and kidney pies, but changed his mind. “I remembered about Americans and kidneys, and substituted the beef Wellington,” he said, adding that Americans are likely to find kidneys appealing only when they denote the shape of swimming pools.

He was often seen about town with his poodle, Trim (a trimmed version of his trimmed name). “He got to know a great many people in the town,” Mrs. Eason said. “He always raised his hat, helped old ladies across the road, and stopped to talk to people.”
Ritchard contributed to many local organizations including the Ridgefield Workshop for the Performing Arts. He read the Declaration of Independence at a 1976 Bicentennial ceremony at the Community Center. “I was shocked when they asked me to do this,” he told the crowd. “I'm not an American. I'm a citizen of Australia. And I love the British. So there!”
Despite his age — he had turned 79 a couple weeks before his death — and warnings from his doctor, Ritchard maintained a work schedule that would tire a much younger man. In 1974, when he was hospitalized after collapsing at work in California, he admitted that “the doctor here says in the future I should be a little less enthusiastic in my work. I had been under pressure for six weeks. I was directing (“Sugar”), but nine other people thought they were, and kept screaming.”
A few months later the 76-year-old appeared in three concerts of  “La Perichole” in Miami and a short time after that, gave 22 performances of 11 different programs during a 2½ week Theatre Guild at Sea cruise in the Caribbean.
“I never worked so hard in my life,” he admitted afterward.
A devout Catholic who attended  Mass almost daily, he was a benefactor of St. Mary's Parish. His funeral in 1977 was at St. Mary’s, with the Mass celebrated by longtime friend and TV celebrity, Bishop Fulton J. Sheen.
Cyril Ritchard is buried at St. Mary’s Cemetery next to his beloved wife, actress Madge Elliott, who had died five years before he moved to Ridgefield — he loved the town so much he had had her remains moved here from New York.
Under his name, Cyril Trimnell-Ritchard, on the gravestone, it says, “Captain Hook.”