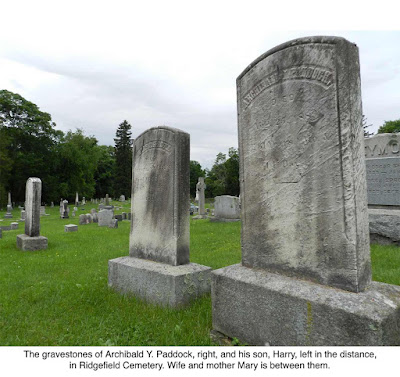 Archibald Y. Paddock:
A Strange Tragedy
On Saturday, Aug. 25, 1889, Dr. Archibald Y. Paddock and his 18-year-old son, Harry, had a late breakfast and decided to go target shooting near their large home on Main Street, just south of St. Stephen’s Church.
“Rifle shooting was a favorite diversion of both father and son,” The New York Times later reported. “They took their rifles and went to the field at the rear of the house where the butts were erected for target practice. They were never again seen alive.”
A coroner subsequently ruled that Harry was doing something with a target when his father accidentally shot and killed him, but no one knows for certain just what happened that led to the boy’s death.
“The father was overwhelmed with grief, and in an instant went to the son, whom he loved as life itself, knelt down, and with the same weapon that enacted the first scene in the tragedy, ended his own life,” The Boston Evening Transcript said.
The father’s body was found lying atop the son’s, The Times noted.
Dr. Paddock, a retired New York City dentist, had been a pillar of the community: treasurer of the First Congregational Church, master of Jerusalem Lodge of Masons, and a close friend of Gov. Phineas Lounsbury, who lived across the street in what’s now the Community Center. By all accounts, he deeply loved his son, who had been an excellent student and athlete, and who was set to begin a career in New York City in the fall.
The coroner ruled Harry’s death was an accident, and that Dr. Paddock’s death was caused by “temporary insanity.” Harry and Archibald were buried in the family plot in Ridgefield Cemetery. For whatever reason, their gravestones are about as far apart as the plot allows.
Dr. Paddock had also been involved in notable deaths of a different sort. In 1874, he was having some sand excavated on North Salem Road when two skeletons, believed to be Hessian soldiers who fought with the British at the Battle of Ridgefield, were uncovered. “The skeletons were lying near each other, side by side,” Ridgefield historian George L. Rockwell said. Dr. Paddock “took possession of the skeletons. One was almost perfect and Dr. Paddock exhibited it at the Centennial Exposition in Philadelphia in 1876.” He refused a $200 offer for it.
Samuel S. Denton, a local merchant, later acquired the Paddock house and decided to move it to the north end of Main Street. At the curve by Casagmo, the building would not fit between the Casagmo stonewall and the hill by the house opposite. Denton asked Casagmo owner George M. Olcott for permission to temporarily take down part of the wall. Olcott refused, so after leaving it in the middle of the road for a couple days, Denton sawed the house in two so it could fit. In the process, the nearly perfect skeleton was found in a sealed closet.
Half of the Paddock house still stands on Main Street just north of Casagmo—the other half, which had been located nearby, was razed years ago.
The location of the Hessian skeleton today is unknown.