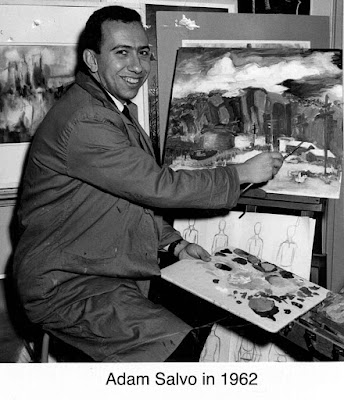 Adam Salvo:
A Huge Inspiration
Teachers are among the most memorable people we meet in life. And a Ridgefield teacher who produced many great memories — and great students — was Adam Salvo, who taught art at RHS for nearly 40 years.
“He was one of my all time favorite teachers in high school,” said alumnus David C. Selwitz, Class of 1973. “Such an inspiration to so many young adults. I loved him.”
Michael Adam Salvo was born in New Haven in 1935 and graduated from what is now Southern Connecticut State University. He went on to earn a master’s degree at Columbia University,  received a degree in art from the Ecole des Beaux-arts at the Palais de Fontainebleau in France, and studied at the National Gallery of Art in Washington, D.C.
He began teaching at Southern Connecticut State in 1957, but two years later came to Ridgefield High School where he soon created and taught the school’s first art history course. He also taught painting and other fine arts, became chairman of the Art Department, and over the years he fostered many young artists.
When news of his death in 2012 was posted on Old Ridgefield, there was an outpouring of praise, including:
“He was a huge inspiration and just the encouraging voice I always needed at the time,” said Terry L. Britton. “He sure went to bat for me on several occasions — I'm grateful that I had someone like him in my life.”
“He truly made me believe I could enjoy and participate in art,” said Cynthia Glasbrenner. “I was never talented, but he told me no one could match my enthusiasm.”
“He was a patient man; I gave him a little bit of holy hell in my senior year,” recalled Tom Bennett.  “I had scored straight A's in art class for 3 1/2 straight years and in the last term of my final year, he gave me a B. It was like receiving an F in anything else for me. I discovered it as a good kick in the pants and I went on to become a painter and illustrator.”
Rob Kinnaird called him “a great man who saw my potential and changed my life.”
“His class opened many doors,” wrote Maren Sirine. “He opened his heart and home to many. A favorite teacher who inspired and encouraged me to go to art school, too. I survived high school with his help!”
Salvo was active in the Aldrich Museum, and was a founder in 1993 of the museum’s Student Docent Program, which began with just two schools in Ridgefield and 10 years later involved 45 schools in 16 towns. The program trains and provides students to serve as docents at the museum.
In 2006, the Aldrich staged a show, called “Homecoming.” Exhibiting artists Damian Loeb, Sarah Bostwick and Doug Wada, all with studios in New York, shared what The New York Times called “a seminal experience”: They each had studied art under Salvo at Ridgefield High School.
“The artists remember him as the rare teacher who treated them as adults and complained about the school administration,” The Times said. “The instructor remembers his former students, too, and regularly treks to their shows.”
Salvo was a longtime Ridgefield resident, living first on Rockwell Road and then on Oscaleta Road. He retired from teaching in 1996.
He was a member of the National Committee on Art Education of the Museum of Modern Art in New York, the American Association of University Professors, and many arts-oriented organizations. He was listed in “Who’s Who in American Education.”
Over the years he had many shows of his own works, including at Silvermine Guild of Artists, Yale University,  and, of course, the Ridgefield Library.
Salvo was 77 years old and living in Guilford when he died.