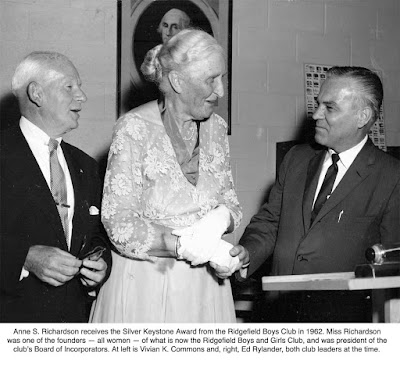 Anne S. Richardson:
Benefactor Par Excellence
For most Ridgefielders, her name is the park on North Salem Road or the auditorium at Ridgefield High School. However, Anne S. Richardson was once one of the most influential women in town, “a moving spirit for its preservation and betterment,” The Press reported when she died in 1965.
A half century after her death, she is still helping Ridgefield and the region.
Born in 1884 into a wealthy family, Richardson came here in 1915 and built her home, Mamanasco Farm, on the plateau created by the great rock overlooking the north end of lake. The estate employed many people whose families still live in Ridgefield.
Soon after arriving, Richardson became active in the community. She and her lifelong companion, Edna Schoyer, helped organize the League of Women Voters in town.
Though she lived far from the village, she promoted the beautification of Main Street, especially preservation and replacement of trees, both as a longstanding member of the Ridgefield Garden Club and as head of its Village Improvement Committee.
In 1939, Richardson, a Republican, and Schoyer, a Democrat, were elected to the Board of Education, serving three years. (Ridgefield High School and Scotts Ridge Middle School stand on part of her farm; the land was purchased by the town from her estate for a relatively small price.)
Richardson was appointed to the original Park Commission in 1946 and remained in office until her death. She helped found the Ridgefield Boys and Girls Club (then just a Boys Club), was active in selling War Bonds, and served in the American Women’s Volunteer Service Corps, aiding the war effort on the home front during World War II.
In 1964, she was named Rotary Citizen of the Year.
She and Schoyer loved travel, and visited scores of countries on every continent (after sailing up the Amazon, The Press once reported, she confided in friends that the natives on the shore were more fully clad than some of the women on board the ship).
Her will, which bequeathed millions to trusts and charities, gave Richardson Park to the town, ordering that her house on the land be razed.
Arguably her most significant bequest was to create the Anne S. Richardson Fund, which, since the mid-1960s, has given away many millions of dollars; in 2015 alone, the fund donated $610,000.
Richardson specified that the gifts be in three areas: Ridgefield organizations (10 got a total of $275,000 in 2015); Fairfield County organizations (mostly helping the poor, youth and conservation); and eight organizations that Miss Richardson had a special interest in. The last group includes the Boys and Girls Club, St. Stephen’s Church, Connecticut College, Yale University, and several hospitals.