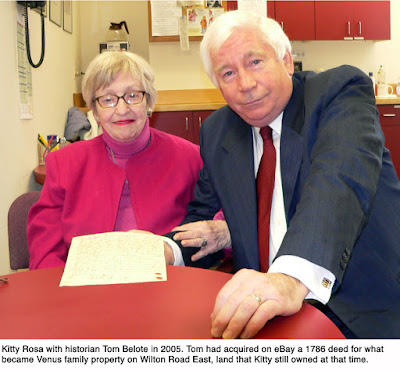 Kathryn Venus Rosa:
Pioneering Preservationist
“I have a fierce sense of protection for our historic past,” said Kathryn Venus Rosa in a 1996 Press interview. “I’d like to be remembered as someone who committed herself to the preservation of our past for future generations, someone who felt it was a privilege to live in a town as beautiful as Ridgefield.”
A founder of the Keeler Tavern Museum and longtime chairman of the Historic District Commission, Kitty Rosa lived not only for history, but in history: Her house was built in the 1700s by the Olmsted family, among the founders of the town.
She was born in Ridgefield in 1921, daughter of Jack and Marion Travis Venus. Her dad, one of nine children born to Mary and Charles Venus, owned Venus Oil Company and Limestone Service Station on Danbury Road. As a child, she loved walking along the Main Street and she especially enjoyed going to antiques auctions with her mother.
She graduated from Ridgefield High School on East Ridge and was voted “best socializer” in her class. After graduating from Merrill Business School, she worked in finance. Her interest in business and antiques merged when she started the Village Trader in a 3,000-square-foot building on Prospect Street, across from what’s now the Prospector. Her husband, Paul, attended auctions on weekends to ensure the shop had a wide variety of antiques and collectibles.
Mrs. Rosa soon became a leading voice for the cause of historic preservation. In 1965, when the private home once known as the Keeler Tavern came on the market, she helped form a small group that eventually included her two mentors, Francis Martin and Preston Bassett, with the goal of purchasing the home for $85,000, then a considerable sum. The result is the Keeler Tavern Museum, for which Mrs. Rosa worked tirelessly, serving many years as president.
“Kitty’s love of history was in full bloom at this incredible pre-Revolutionary home and she donned her period costume regularly as a tour guide for visitors who shared her enthusiasm for its history,” said her daughter, Elizabeth Beresford.
In 1970 she was appointed to the Historic District Commission, the agency that oversees the preservation of properties on southern Main Street, eastern West Lane, and southern High Ridge. She spent 40 years on the commission and was its chair from 1973 to 1999. 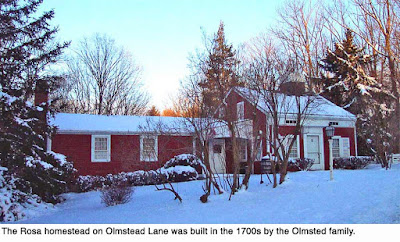 Mrs. Rosa was among the team that saved the Scott House on Catoonah Street by raising over half a million dollars to dismantle the historic building board by board and reconstruct it on Sunset Lane. It  opened there in 2002 as the Ridgefield Historical Society.
“Through many conversations with Kitty, her love of Ridgefield, and the work she did to preserve its history and beauty, was always foremost in her mind,” said Town Historian Kay Ables. “Kitty gave so much of herself in every job she undertook.
“In the early days of the historical society, when money was being raised to reconstruct the building, Kitty worked tirelessly with Jeanne Timpanelli and Dave Scott to choose the furniture, select the proper lighting, the paint, which has become Kitty’s green, and so many other details. Kitty was on our original board,” Ms. Ables said.
She also helped in the project to launch Ridgefield’s performing arts center, The Ridgefield Playhouse, to host concerts, plays, dance recitals, and movies in the old RHS auditorium, which had been designed by Cass Gilbert Jr.
“Kitty was extremely proud of this living legacy, the culmination of all her efforts to make Ridgefield one of the finest communities in the land,” her daughter said.
She and her husband Paul — a former Ridgefield selectman — were honored as the Kiwanis Club’s Citizens of the Year in 1997.
In 2000, Mrs. Rosa received the Harlan H. Griswold Award, the state’s highest award for historic preservation. At the presentation, John W. Shannahan, director of the Connecticut Historical Commission, said Mrs. Rosa is “the woman who, perhaps more than any other individual, has been directly responsible for protecting the historical and architectural integrity of this extraordinary, yet most livable, community.”
She died in 2014 in California, where she was living with her daughter. She was 92.