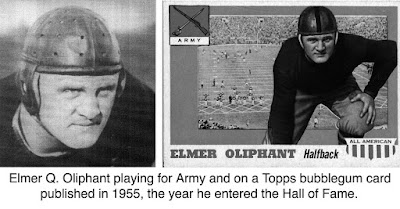 Elmer Q. Oliphant:
An Early All-American
Who was the greatest athlete ever to have lived in Ridgefield? Quite possibly Elmer Q. Oliphant, a name almost forgotten today but known to almost every sports fan of the first third of the 20th Century.
An Indiana native, Ollie Oliphant was born in 1892 and attended Purdue from 1911 to 1913. Although he was there only two years, he is today one of 17 members of the school’s Football Hall of Fame. Among the records he still holds are most points scored in a game (43) and most touchdowns scored in a game (5)
In 1914, he transferred to West Point. When he arrived, he was greeted by an upper-class cadet named Dwight D. Eisenhower.
“Who are you?” demanded Eisenhower
“Oliphant,” grinned the newcomer.
“Oliphant WHAT?” roared Eisenhower.
“Oliphant, Elmer Quillen” replied the new cadet.
“You mean — ‘Oliphant, SIR,’ ” Eisenhower responded, adding, “Wipe that smile off your face. Put it in your pocket. Untack those pants. Now, forward march, up to the Guard House.”
Oliphant told the story to a newspaper columnist after he had gotten a letter from Eisenhower while the general was in Africa during World War II.
At the U.S. Military Academy, Oliphant became the first cadet ever to letter in seven sports (football, baseball, basketball, track, boxing, swimming, and hockey).
In 1916, as an Army back, he was a football All-American; Knute Rockne later included him on his own all-time All-American team. In his college football career, he was credited with  435 points – 135 at Purdue and 300 at Army.
His abilities were legend. The New York Times once reported that “Mr. Oliphant’s most notable field goal was kicked after he had suffered a broken ankle in a game against Illinois. His kick accounted for a 3-0 victory. While playing basketball for Purdue against Wisconsin, he shot the winning basket while seated on the floor.”
After graduating from West Point, Oliphant became a small-arms instructor at Fort Benning, Ga. In 1920 he returned to the military academy to establish the first college intramurals program in the nation — “you’re talking to the daddy of intramural athletics,” he told a Ridgefield Press reporter in 1950. The idea was copied by the Naval Academy and was soon used in colleges and universities across the country.
He also became West Point’s first full-time coach.
After his service in the Army, he played in 1921 for the Buffalo All-Americans in the early years of what is now the National Football League. While he led the league with 47 points that year (including throwing seven touchdowns, and kicking five field goals and 26 point after touchdowns), he retired from playing after that season. He joined the Metropolitan Life Insurance Company, became an executive there and retired in 1957.
In 1955, Mr. Oliphant was elected to the National Football Hall of Fame.
He and his wife Barbara moved to Wilton Road West in the 1940s, and both — especially Barbara — were active in the Ridgefield community. They moved to New Canaan in 1952, but after Mr. Oliphant died in 1975 at the age of 82, he was buried at St. Mary's Cemetery in Ridgefield.
“The greatest value of athletics is found in the realm of character building,” Oliphant once said. “Sound hearts, strong bodies, clear minds, and high ideals in life are the objectives.”