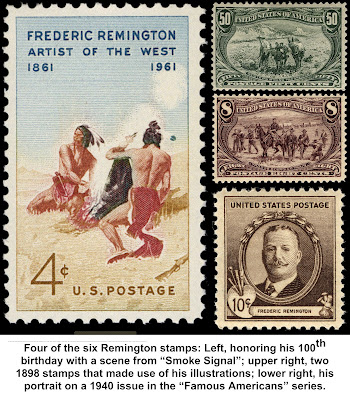 Frederic Remington:
He Knew the Horse
Frederic Remington’s pictures and sculptures depicting the Old West are in countless museums and collections, and bring large prices: A sculpture in bronze, called “The Wounded Bunkie,” sold at auction for $5.6 million in 2008 while an oil painting, “A Reconnaissance,” fetched $5.2 million at a 1999 auction.
Even postal people love him: Few Americans outside of presidents like George Washington have been so extensively remembered on United States postage stamps—at least six bear his art or his face.
Unfortunately for Remington, his stay in Ridgefield was brief. He died six months after arriving.
Though his fame is based on the Old West that he so colorfully documented, Frederic Sackrider Remington spent all but a few years of his life in the Northeast. He was born in 1861 in Canton, N.Y., son of a newspaper editor who wanted him to pursue that career.
While he attended military schools in Vermont and Massachusetts, Remington found he loved to draw more than to write or fight, and he wound up attending the School of Fine Arts at Yale, where he also played football for the Bulldogs. His first published illustration was a cartoon of a “bandaged football player” for a student newspaper.
He left Yale when his father became seriously ill and died. With an inheritance in hand, Remington decided against returning to college, and headed west in 1881 to seek adventure; he was only 19 years old. In the next few years, he traveled widely in the western states and territories, working as a cowboy, a sheep rancher, a saloon owner, a reporter, and at other jobs—all the while sketching what he was seeing.
Around 1885, he came back east, studied at the Art Students League, and began an illustrating career with Harper’s Magazine in the days before photographs were common in publications. He returned to the West briefly to cover the Indian Wars in Apache country for Harper’s. By then, he was earning $1,200 a year as a commercial artist, a sizable sum at the time. “That’s a pretty good break for an ex cow-puncher,” he said.
Remington went on to illustrate not only for magazines, but also books, and wound up writing a half dozen books of his own about the West. Virtually all of his illustrations, his paintings and later his sculpture dealt with the Western themes.  “I knew the wild riders and vacant lands were about to vanish forever,” he wrote. “And the more I considered the subject, the bigger the forever loomed.”
While he became widely praised as an illustrator, Remington wanted recognition as an artist. By the turn of the 20th century, he was devoting much of his time to painting and sculpture—and even burned many earlier works he felt were too much like illustrations.
Remington was living and working in New Rochelle, N.Y. when he decided he wanted a wilder environment. (Another noted New Rochelle artist-illustrator later did the same; Norman Rockwell moved first to Vermont, and later Stockbridge, Mass.)
There are several stories about why Remington chose Ridgefield. One was that the town was recommended by his lifelong friend, Alonzo Barton Hepburn, with whom he had grown up in upstate New York; Hepburn, Chase Bank president, had recently built a mansion on High Ridge, called Altnacraig.
Another explanation was that Poultney Bigelow, a close friend who was editor and founder of Outing magazine, had recommended Ridgefield for both its wildness and its sophistication. Bigelow lived in nearby New York State and probably knew the town from visits.
Perhaps both Hepburn and Bigelow had talked up the town to Remington, who at the same time was being strongly influenced by the Impressionist movement—and a leading impressionist, J. Alden Weir, lived in Ridgefield and was often visited by Remington’s friend, Childe Hassam.
Remington wound up buying 42 acres along Barry Avenue on which he and his wife, Eva, designed a sizable home and a state-of-the-art studio that featured a huge fieldstone fireplace, and large (for the era) plate glass windows. The estate was known as Lural Place, according to his 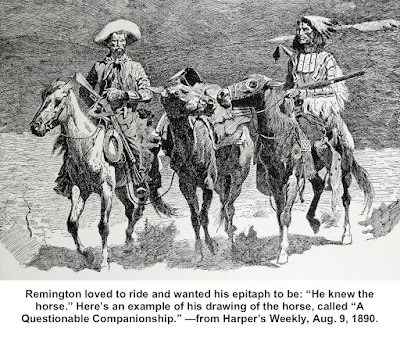 Ridgefield Press obituary, but another source said he called it “One Hoss Farm.” After his death the estate became known as Oak Knoll, a name that has stuck over the decades since.
Remington moved into the home in July 1909. In December, he fell ill and was eventually diagnosed with appendicitis that developed into peritonitis. His condition was said to have been exacerbated by his treating himself with laxatives and the fact that he weighed 300 pounds.

An emergency operation was performed at his house—reportedly on the dining room table. As The Press said at the time, “The artist rallied after the operation and it was believed he would recover. Complications, however, entered into the case on Saturday and the patient sank rapidly during the night.” He died Sunday, the day after Christmas. He was only 48 years old.
During his career Remington produced more than 3,000 drawings, illustrations, paintings, and bronzes. “The extent of what he might have been was curtailed only by his untimely death at a time when he could have had 20 years of growth ahead of him, but he was already the paramount exponent of his kind of art and the most American of them all,” said biographers Peggy and Harold Samuels.
Remington loved riding and depicting horses in action, be it on canvass or in bronze. “When I die,” he told a friend not long before his death, “I want my epitaph to be, ‘He knew the horse.’” However, his spare gravestone in Canton, N.Y., bears only his name and the years of his birth and death.
In 1965, Remington’s house was declared a national historic landmark. The studio he had in the house has been reproduced in detail at the Remington Art Museum in Ogdensburg, N.Y., where his family once lived.
For years, townspeople had wanted a road name recalling the artist. From shortly after his death until well into the 1950s, various movements tried to have Barry Avenue changed to Remington Road. In fact, a 1927 map of property along Barry Avenue called the highway “Remington Road.”
A new road at the1960s Westmoreland subdivision gave the town an opportunity to commemorate the artist: Remington Road runs between Barry Avenue and Peaceable Hill Road, intersecting Barry Avenue not far from Remington’s house.
Perhaps the artist had gotten a chance to hunt on the Westmoreland estate during his brief stay here.—from “Hidden History of Ridgefield,” History Press, 2015