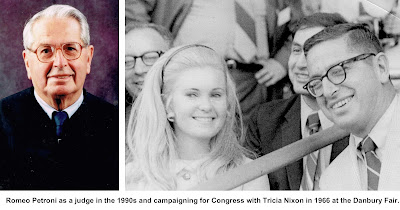 Romeo Petroni,
The Friendly Judge
For many Ridgefielders, he was the tall, friendly fellow with the big smile who’d stand on the sidewalk in front of the town hall or Squash’s, selling Lions Club raffle tickets or promoting a candidate in the local election. For others throughout Connecticut, he was the distinguished, silver-haired man in black robes who presided over their trial.
After a long life of working and serving in his home town, Romeo Petroni became the first native to serve as a Connecticut Superior Court judge.
“It’s a demanding, challenging position that requires broad knowledge of the law, but at this point in my life, I’m ready for it,” Judge Petroni said in May 1990 when he received the appointment.
Romeo Geno Petroni was born in Ridgefield in 1929, the son of immigrants from Italy. His father, a laborer, died when Petroni was nine, leaving his mother, Madalena, to bring up him and his sister. Petroni worked hard in school and became president of his Ridgefield High School graduating class in 1946. He went to Syracuse University, graduated from Fordham Law School, and served in the U.S. Army for two years.
He returned to town in 1957, joining the law practice of  John E. Dowling, a prominent Democrat, as an associate. The same year, Petroni got his first taste of public service  when he became town attorney during the administration of his father-in-law, First Selectman Leo F. Carroll.
Four years later, running as a Republican, Petroni was elected Ridgefield’s state representative, serving until 1967.
In 1966, Petroni made an unsuccessful run for Congress, and was always proud of the fact that at a fundraising dinner in his honor, the speaker was Gerald R. Ford, then a congressman and minority leader of the House. Among other GOP notables who campaigned for him was Tricia Nixon, daughter of soon-to-be president Richard M. Nixon.
His campaign platform included his belief that President Lyndon Johnson should have negotiated with the North Vietnamese leaders to try to end the Vietnam War. ”I think we should see the President personally enter into direct negotiations with the foe rather than have him assign Secretary of State Dean Rusk or Defense Secretary Robert McNamara to do the chore,” he told interviewers from the Danbury News-Times.
From 1971 to 1974, he was a state senator and in 1974 was elected Ridgefield’s probate judge, a position he held for 16 years.
In 1986, he ran for governor, but failed to get the Republican nomination. Oddly enough, he was nominated to the Superior Court by the man he would have run against, incumbent Democratic Governor William O’Neill.
Throughout his career in Ridgefield, Petroni was very active in the community, and among other things was chairman of Boy Scout fund drives, a director of the Boys Club and the Village Bank, and a trustee of St. Mary’s Parish. He belonged to the Lions Club, Knights of Columbus, Italian-American Club, and the Ridgefield Volunteer Fire Department. For many of these groups, he provided free legal services.
He received many honors, including Rotary Club Citizen of the Year in 1984 and a Ridgefield Old Timers award, and was listed in “Who’s Who in American Politics” for many years.
Judge Petroni called Ridgefield home for 60 years, but soon after becoming a judge, moved to the New Haven area to be closer to the courts in which he would preside.
He continued to serve as a regular judge until he turned 70 in 1999, when he was named a judge trial referee, a part-time position in which he could be selected to preside over special cases, often involving family disputes and children.
He and his wife, Catherine,  lived in Madison where he died in 2015 at the age of 86.
Petroni was always a strong family man and when local Republicans honored him at a dinner in 1982, he declared, “My good mother, my strong and righteous wife, my daughters — when you honored me tonight, you honored them, and for that I am truly happy and grateful.”
That same dinner, which also served as a GOP fundraiser, was attended by  many Democrats, including Selectman Lillian Moorhead, one of the most dedicated Democrats in town.
“I just want you all to know how painful it was for me to write out a check to the Republican Town Committee,” she told the gathering about her ticket purchase. “I really can’t think of many people I’d do that for, and Romeo’s one of them.”