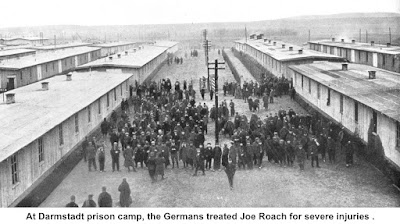 Joseph Roach:
The Wounds of War
Some people are killed in war. Others can die of war injuries long after combat has ended.
The latter may have been the case with Joe Roach, who was wounded in World War I but lived with his injuries and contributed considerably to his community until 1948 when he finally succumbed to war wounds at the age of 53.
Joseph Aloysius Roach was born in New York in 1896, and came to town as a child,  attending local schools and graduating from Ridgefield High School. He went to work for his father’s stone-cutting business, but when the United State entered World War I, he joined the Army’s Yankee Division.
After instruction in intelligence work with the French Army, he wound up in combat in France. At Seicheprey, “he was knocked unconscious in an enemy raid, sustaining four bullet wounds and eight shrapnel wounds,” The Ridgefield Press reported.
Still unconscious, Roach was taken prisoner by the Germans and sent to Darmstadt prison camp, where he was treated for his injuries. From there he was transferred to a prison camp in the Westphalia region of Germany, from which he escaped to the border of Holland 43 miles away. He crossed the channel to England, was returned to the United States, and was discharged from the Army.
Back home, he became of the a founder of the American Legion Post and its first commander, served on the Board of Education, was a grand knight of the Knights of Columbus, was active in the Republican party, and operated the stone-cutting and gravestone business of his father. He was also active in Boy Scouting and was considered an excellent boxer, back in the days when boxing was a popular sport in Ridgefield.
The Press described his last days in 1948. “Mr. Roach died unexpectedly Sunday afternoon at the Veterans Hospital at Rocky Hill whence he had been transferred two days earlier from the Veterans Administration Hospital in Newington. For several months he had been under treatment for a lung condition directly traced to the bullet and shrapnel wounds in the 1914-1918 war. At Newington, one lung had been removed and he had shown sufficient improvement to be moved to Rocky Hill, although his condition remained serious.”
Town Historian Richard E. Venus knew Roach well and suggested that his death at a relatively young age may have been exacerbated by inherited problems and by his job.
“Joe came from a large family, most of whom were plagued by what was commonly called consumption,” he wrote in a 1982 column. “Today we refer to it as tuberculosis of the lungs.
“As I was aware of the history of this family problem, I always felt a twinge of sadness when I saw Joe inhaling the dust as he made the engravings on the pieces of granite. Later, a mask was developed as protection against the dust.”