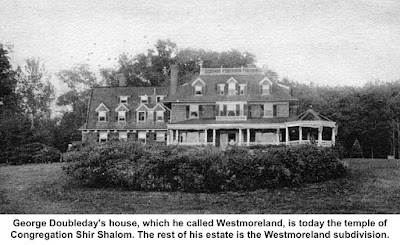 George Doubleday:
The Man of Westmoreland
George Doubleday was the once-famous, rich and powerful head of Ingersoll-Rand Corporation, but his legacy in Ridgefield is a house of worship and a neighborhood.
Born in 1866 in Michigan, George A. Doubleday had no connection with the book publishing company (as is sometimes reported in town). He joined Ingersoll Sergeant Drill Company in 1894 as an auditor, soon became treasurer, and when it consolidated into Ingersoll-Rand in 1905, was named a vice-president. By 1913, he was president, a post he held until 1935. He was chairman of the board till 1955, the year he died at the age of 89.
When he took over the company in 1913, a corporate history says, “Doubleday was determined to make Ingersoll-Rand the leader in its product areas — drills, air compressors, jackhammers, pneumatic tools, and industrial pumps.” He kept the company very profitable and debt free, but in the end was criticized for failing to diversify. After his death subsequent leaders did just that. Today, Ingersoll-Rand owns such brands as Schlage locks, Thermo King transport temperature control equipment, Bobcat compact construction equipment, and Club Car golf vehicles.
Ingersoll-Rand had major plants in Phillipsburg, N.J., Easton and Athens, Pa., and Painted Post, N.Y. “In these locations, Ingersoll-Rand was the major employer,” the company history said. “Community life centered on the firm: Many workers lived in company-owned houses, and community and school events were held in company buildings.
“Doubleday hired boys off the farm and trained them to become skilled machinists through a seven-year apprenticeship. These artisans accepted the company’s credo of pride in personal work, and only a handful of quality-control specialists were needed. Doubleday charged a premium price for the high-quality machinery this system produced.”
George Doubleday was a rather private individual — he would not even provide a picture of himself for the press and images of him are exceedingly rare. He carried this trait over into his operation of the company, the history said.  “He provided a bare minimum of information about 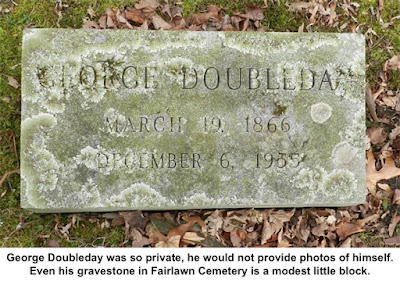 Ingersoll-Rand. Under Doubleday the company never released a quarterly report and its annual report was a single folded sheet of paper containing only the figures the New York Stock Exchange required.”

In 1939, the House Ways and Means Committee listed the highest salaried men in the nation, and George Doubleday, at the then-tidy sum of $78,000 — equal to $1.4 million today — was the only Ridgefielder on it.
Doubleday made Ridgefield his home for 40 years, buying the former Francis Bacon mansion, “Nutholme,” on Peaceable Street in 1915. He proceeded to acquire much of the neighboring land, mostly to the west and totalling nearly 300 acres. He gave his vast estate a new name, “Westmoreland,” presumably because it was moorlike and west of the village.
In town, he was president of the nearby Ridgefield Golf Club (later Ward Acres) for many years, and his first wife, Alice Moffitt Doubleday, was active in the Ridgefield Garden Club and sang in St. Mary’s Choir. (Her sister was Mrs. John H. Lynch, whose West Mountain estate is now the Ridgefield Academy.) After Alice Doubleday died in 1919, George married his secretary, Mary White, and she, too, was active in the garden club and was a founder of the Ridgefield Boys’ Club.
In the early 1960s, Doubleday’s heirs offered the town 250 acres of Westmoreland, some of which was talked of as the site for a multiple school campus; town fathers turned it down as expensive and unneeded. A Massachusetts firm quickly bought the property and subdivided it into 150 house lots, which the late Jerry Tuccio developed.
In the early 1970s, the estate’s mansion was acquired by Temple Shearith Israel, now Congregation Shir Shalom, which still uses it as its temple and school.
George’s son, James M. Doubleday (1907-1970), became well-known in town. Over the years the Princeton graduate and local banking leader bought  several estates, razing the old mansions and replacing them with more modern and efficient equivalents. One place was the old Hillaire estate off West Mountain Road where his new home was called Hobby Hill. The estate was later subdivided and a road serving it, Doubleday Lane, today recalls James.