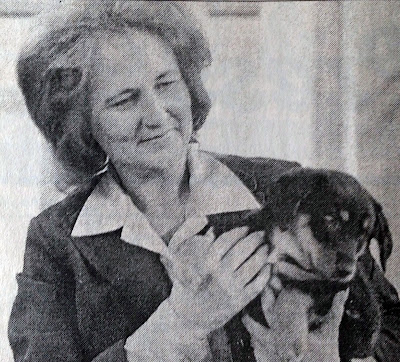 Gail Roberts:
Tough Dog Warden
As late as the mid-1970s, the sight of a roaming dog was commonplace in Ridgefield. But by the time Gail Roberts died in 1997, a roaming dog was as rare as a gray fox.
The town’s dog warden from 1977 until her death, Ms. Roberts was especially tough with people who allowed their dogs to roam because, she repeatedly pointed out, many loose dogs were maimed or killed by cars.
She told of once coming across a dog “flatter than a pancake” on Barry Avenue. She called the owners and when they said they thought the town should take care of the dead dog, she ordered them to pick up the body.
“By the way, bring a shovel and a box,” she told them.
“When an owner has to do that,” she said later, “they will think twice about letting a dog roam.”
Gail Roberts started as assistant warden in 1973, became full-time in 1977, and during the quarter century she did the job, facilities and treatment of animals improved considerable. She was also known for working hard to try to find homes for abandoned dogs.