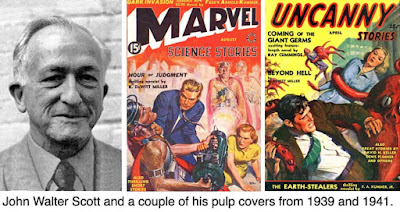 Artist of the West
John Walter Scott Jr. had a varied and successful career as an illustrator and an artist whose works were enjoyed by millions of people, most of whom did not know his name.
Born in 1907 in New Jersey, Scott was attending art school at the age of 16, and by the time he was in his 20s, was freelancing covers for some of the leading pulp fiction magazines of the 1930s, including All Star Fiction, Best Western, Detective Short Stories, Future Fiction,  Marvel Science Stories, Mystery Tales, Quick-Trigger Western, Real Sports, Two-Gun Western,  Uncanny Tales, and Western Novel and Short Stories.
By the late 1930s, he was moving to slick magazines like Coronet, Woman’s Day and This Week, doing covers and story illustrations.
During the war, he joined the staff of Yank, an Army magazine covering events on the European battle front. His war drawings are now part of the Army’s historical archives.
After the war, he began to focus his illustrations on the outdoors, doing hunting and fishing pictures for Sports Afield, True, and Argosy, all men’s magazines.  He eventually got commissions 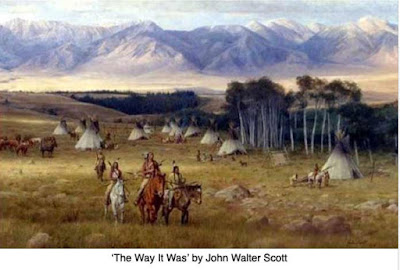 for large-scale murals in major buildings; some of his best-known were for the Mormon temples at Salt Lake City and Washington, D.C.

John Scott spent his last years as an artist of the Old West — perhaps he was influenced by the pulp western covers he did in the 1930s as well as by the work of Frederic Remington — who died in Ridgefield two years after Scott was born. In the 1970s and 80s, he was being referred to as the “dean of the Remington Traditionalists.” His western works show up on the art market today; one recently sold at auction for $22,500. (Originals of his 1930s pulp fiction cover art fetch as much as $12,000.)
Even as an illustrator, Scott painted what he liked to paint, but in his final years, he seemed to enjoy himself most as an artist of the West. “I paint the pictures I am interested in painting,” he once 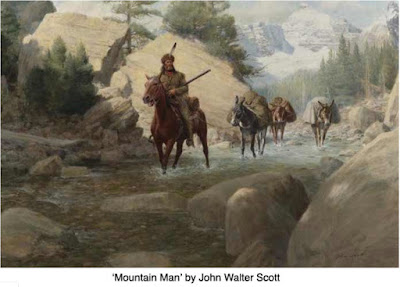 told an interviewer. “Much of contemporary art is about people who think they are ‘in.’ The quickest way to lose yourself is to lose your individuality. The important thing is to be yourself and forget about being ‘in.’ ”

Mr. Scott died in 1987 at the age of 79. He was married to Flavia “Punky” Scott, also an artist, who died in 2011; her father was prolific magazine artist, Frank Bensing.
The Scotts, who came here in 1948, owned an 1860s house on North Salem Road that is now on the National Register of Historic Places; it was once the home of early circus manager Lewis June.