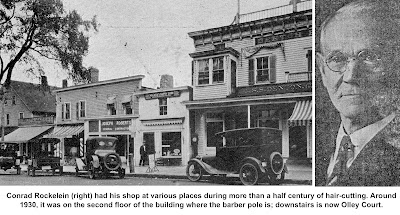 Conrad Rockelein,
90-Hour Weeks
Conrad Rockelein was the epitome of the hard-working immigrant, a man who spent years of 90-hour weeks at his craft of haircutting. But his legacy to Ridgefield is not old pictures of ancestors who are well-coiffed, but one of Ridgefield’s first “neighborhoods.”
Rockelein was born in Germany in 1867, came to this country at the age of 14, and spent most of his life in Ridgefield.
On April 22, 1889, when Rockelein put up his first barber’s pole on Main Street, old “Doc” Reynolds was operating the only other barber shop in Ridgefield. But, according to newsman and historian Karl S. Nash, “Doc liked to go fishing and he closed his shop most any time he thought the fish would be biting. So his new competitor wasn’t long in getting his shop on a good paying basis.”
“Back in 1889, I opened my shop at 7 a.m. and stayed at my chair until 9 p.m. every day except Saturday when the shop was open till midnight,” he told The Ridgefield Press in 1940. “And then I was on the job also from 7 a.m. to noon on Sunday.
“The price of a haircut in those days was 25 cents. A shave cost 10 cents, or 15 cents with bay rum.”
His business grew quickly and was prospering when the Great Fire of 1895 burned down most of the commercial section of town, including Rockelein’s shop. “But the embers had hardly cooled before he was temporarily set up for business again in the back room of Will Benedict’s Store,” Nash wrote.
Soon he had a shop running over where Deborah Ann’s Sweet Shoppe is now and in the years that followed, he moved to various locations around the village, including his own home  (from 1900 to 1908, he was in ill health — possibly due to those 90-plus hour weeks of work —  and mostly retired from barbering).
In 1938 when he observed his 50th year in business, Rockelein estimated he had performed 20,000 haircuts, but he would not venture a guess on the number of shaves. He finally retired in 1945.
Rockelein lived on Mountain View Avenue, in a sizable neighborhood he himself subdivided. In fact, he could be considered one of Ridgefield’s first developers.
By 1910, he had acquired 19.4 acres of hayfield which he laid out into 75-by-250 foot lots.  A new subdivision plan, filed in 1927, called the neighborhood Mountain View Park and named its three roads Island Hill Avenue, Hillsdale "Street" and Mountain View Avenue.
He felt his development would serve many of the immigrant Italian, German and Irish families that had been coming to town and were becoming prosperous enough to build houses of their own.
He named the development for its views of Titicus Mountain to the west and Copps Mountain to the north — views obscured today by trees that have been planted and have matured since Rockelein bought the treeless hayfield.
Despite all his work, Rockelein found time to be active in the Jesse Lee Methodist Church, where he was a steward, trustee and treasurer. He also belonged to the Masons.
He died in 1954 at the age of 87.