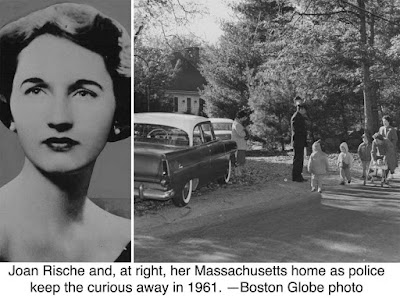 Joan Risch:
The Woman Who Vanished
A one-time resident of Ridgefield, who had been a homemaker and mother, became the center of one of New England’s most publicized mysteries of the 20th Century.
Joan Carolyn Risch and her husband, Martin, had lived on Rowland Lane in the 1950s, moving to Lincoln, Mass., in 1961. Seven months later, on Oct. 24, 1961, Mrs. Risch disappeared from her home, leaving behind two children, aged 4 and 2.
Martin Risch was away on a business trip that day. In the morning, Joan took her four-year-old daughter to the dentist, did some shopping and returned home for lunch. She put her two-year-old in a crib for a nap and sent the daughter to a neighbor’s house to play.
Police were summoned after the daughter came home at 4 and found her house empty, except for the two-year-old in his crib.
“Mommy is gone and the kitchen is covered with red paint,” the daughter told a neighbor.
A trail of blood led from the kitchen to the driveway where a neighbor reported seeing her earlier, standing by her car, looking dazed. Mrs. Risch, who was 30, was never seen again.
In the kitchen, the phone had been ripped from the wall and some bloody fingerprints, not hers, were found, but were never identified. A phone book was open to the page of emergency numbers.
Investigators later said the blood in the kitchen and on the driveway probably came from a superficial wound — there was not much of it.
There were various reports of a dazed woman walking along a highway, and of a mysterious gray car, but nothing ever came of them.
Some people theorized that Risch, dazed from an attack, fell into a pit that had been dug as part of the construction of the new Route 128 beltway near her house, and was unknowingly buried.
Most intriguing, however, was the speculation that she had staged her own disappearance because she was unhappy with her life.  A local reporter discovered Mrs. Risch had checked out more than 20 books on murder and disappearances from the local library in the previous months.
However, friends maintained she was devoted to her family and would not have deserted her children.
A native of Brooklyn, N.Y., Joan Risch graduated in 1952 from Wilson College in Pennsylvanian with a English degree. Adding to the strangeness of the case was the fact that both of Joan Risch’s parents were killed in a fire when she was nine years old, and she was raised by an aunt and uncle.