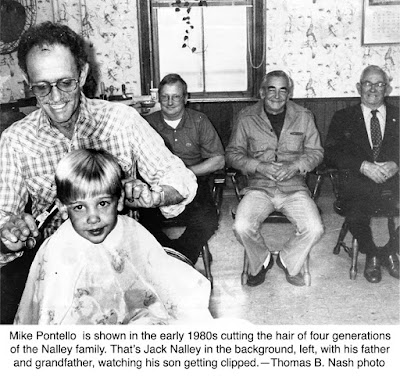 Michael Pontello:
In Love with Ridgefield
"I love my life," Mike Pontello told a friend one day in 1999. "I love what I'm doing. I love Ridgefield. To me, Ridgefield is a romance."
And to Ridgefield, Pontello was for years a one-man cheering squad, a smiling face who daily to promote the village —- right down to building dozens of storefront flower boxes and trash-can housings that used to line the street.
"I'll do all I can to keep Main Street afloat," he said when times for the business district were tougher than they are now.
Michael R. Pontello was born in 1931 but was orphaned as a boy and grew up with a family in Norwalk. He served with the Army in Korea (where he was injured by shrapnel).
In 1955 he met Ridgefield native Agatha Mugavero and they were married a year later.
Pontello attended barber school in New York City, and went to work for his father-in-law, Jerry Mugavero, at Jerry's Barber Shop on Main Street. He took over the business in 1970 when  Mugavero retired.
An avid fisherman, he wrote a fishing column for The Ridgefield Press in the 1960s, always ending it, “Take a kid fishing.” In the 1980s, he began making colorful wooden toys and signs at the shop, and many of his creations have been donated to beautification efforts and for fund-raising campaigns.
Active in town, he was a member of the Ridgefield Downtown Council and volunteered to maintain the flowers and greens within downtown Ridgefield. He was a member of the Ridgefield Volunteer Fire Department and the fire police, belonged to the Veterans of Foreign Wars, Italian American Mutual Aid Society, and the Masons, and was a volunteer with Meals on Wheels. "Volunteering, it's very important," he once said. "Without volunteers you'd have nothing."
In 1990, he contributed the new town hall flagpole in memory of his wife, who had just died.
He received many honors, among them the Chamber of Commerce Public Service Award in the 1980s. In 1991, Rotary named him Citizen of the Year. "The achievements and deeds of Mike are to known to anyone who has any appreciation of the aesthetic side of the community," said Dr. David E. Weingast, former school superintendent, at the Rotary awards banquet. "Artifice and phoniness are alien to Mike (who) has a very great love of other human beings. He's impelled to conduct good deeds."
He also loved to talk. "Knowing Mike for five minutes meant you knew where Michael stood on damn near everything that's important,” said John Katz, who conversed with Pontello nearly every morning at the Early Bird Cafe.
In 2000, recognizing a need and seeing the right person for it, the town hired Pontello as the part-time caretaker of the village sidewalks. He continued in that job even when he began dealing with the cancer that would kill him.
To help with the costs of his illness, friends and business neighbors of his Main Street barbershop organized a ‘We Like Mike' benefit chicken dinner at the Italian Club that drew so many people it ran out of chicken. Even as he was in chemotherapy he could be seen out weeding and watering flowers on the Main Street that for years he'd cared for as if it were his own garden.
In an interview shortly before his death in 2003, when he knew his days were numbered, he told a reporter, “You roll with the punches. You know what? You’ve got to take what you’ve got.  You can’t feel sorry for yourself.”
As for the years of cancer treatment he had endured, “The doctors are doctors — they’re not God,” he said, adding, “Enjoy what’s above ground, because some day you’ll be under it."
The outpouring of support had touched him. "People are wonderful," he said. "I never realized how much I was liked, what an impact I had."
Mike Pontello added, "I'm going to miss this town when I go.”